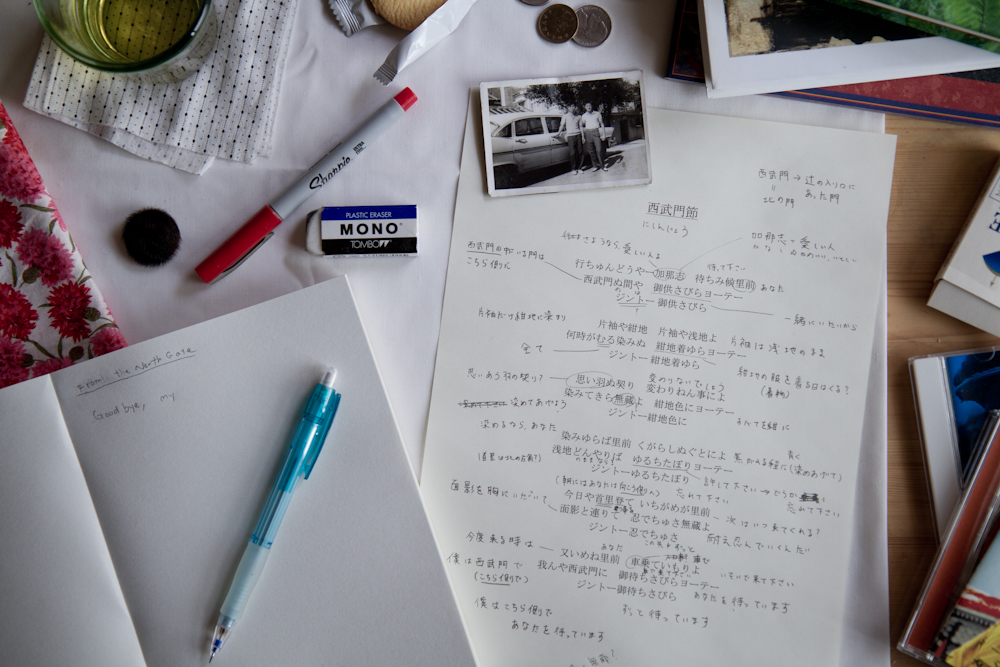 Nishinjo was a name of the gate of Tsuji, a red light district in Naha that prospered prior to the war. Nishinjo translates to “north gate” in English. The street that ran through the gate eventually reached Shuri Castle, the royal capital of the Ryukyu Kingdom. The song “Nishinjo Bushi,” often sung as a male/female duet, tells a story of a prostitute in love with a rich man, probably a bureaucrat, working in Shuri. The two spend nights together, and they always part at the gate. “Please come with a car next time, so that we can stay longer,” begs the prostitute.

I tired to translate the song into English. To get a better understanding of the lyrics, I first needed to translate it into Japanese. Wan (first person pronoun in Okinawan) could be translated to watashi (female pronoun in Japanese) . . . or boku (male pronoun)? Then I realized that it didn’t matter because in English it would all be translated as “I.” Jo means a gate and kuruma is . . . a car. A car . . . I remembered the cars American people rode in Okinawa. They all had the character “Y” on the license plates to distinguish them from those owned by the Okinawan locals. Y-numbers (that was how we called the American owned cars) could freely go in and out of the gates of American military bases, while most of the Okinawans couldn’t. And it was those American men on Y-numbers who contributed to Tsuji thriving again after the war, albeit temporarily.

Also it was the area where the Teahouse of the August Moon was built during the American occupation-era. It became the model for the film of the same name, which told a love story between a Okinawan geisha girl and an American soldier.