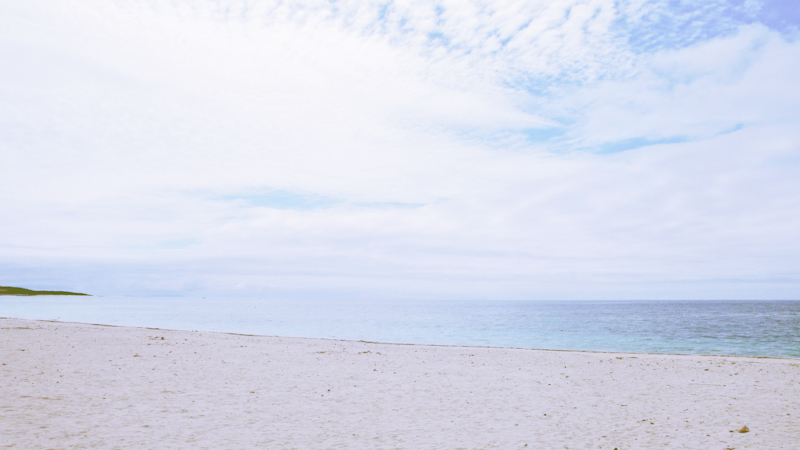 I recently discovered that the island where I grew up suffered sporadic air raids during WWII. There were even incidents in which the locals were killed by the stationing Japanese soldiers. When I was a child, the adults told me that the island never suffered damage of the war. Perhaps they were concealing the horrific past to heal the wounds caused by it. The story of the men who drifted ashore on the island, which I thought was a fiction my friend made up, turned out to be true. The men, deserters, left the war-devastated mainland Okinawa on a small boat at night, survived the night storm and were washed up on the island.

I was becoming delirious. The glowing sea sparkles increased as the waves got harsher. Soon they turned into the swelling crowd of skulls surrounding our boat. The skulls cursed at us, ”don’t you escape, don’t you leave us behind.”
—Norio Watanabe, Nigeru Hei [Fleeing Soldiers] (Bungeisha, 2000)

It happened a little before the Battle of Okinawa ended in June 1945. At the time, a small number of Japanese soldiers were stationed on the island. They had long lost contact with the headquarters and had no idea of what was happening on mainland Okinawa. The presence of the deserters, who knew Japan’s defeat was near, disturbed the soldiers who still believed in their victory. When the battle ended on the mainland, the Americans sent their armies to the island to build a temporary military camp. Some of the deserters managed to surrender immediately. The Japanese soldiers became paranoiac: they engaged in sporadic gunfights with the Americans, and went as far as killing the remaining deserters and the locals, labeling them as spies. All the while, it was said that the leader of the Japanese soldiers kept a mistress, a local girl, who got pregnant.

Even now that my grandparents have passed away, I am still not sure if I can ask my parents about the island’s past; it somehow feels ethically wrong. With a few clues I get from books, I am beginning to have a clearer view of the history of the island. I discovered that the deserters were washed up to the beach by Y’s house.

It was where we ate Blue Seal ice cream together when we were 16. And it was where we had a bonfire with our former classmates when we were 20. We gathered at the beach at night after the coming of age ceremony with beer cans in our hands. I was living in America at the time and was back in the island for the ceremony. It had been quite a while since we all last met. The beach was incredibly dark at night and the sound of waves was surprisingly loud. Someone started a bonfire, but nobody seemed to care; some were looking up at the stars, some were lying on the beach, others were walking into the woods. I distanced myself from the sad bonfire and walked towards the water. The wet sand on the water’s edge felt soft in my hands. As I dag into it, I found some glowing things. On my hand, they emitted a pale, blue glow. It was too dark to see what they were but their organic glow suggested that they were alive. “Sea sparkles,” I said to someone standing beside me. It was Y. Indifferently sipping his beer, he said it might just be the phosphorescent parts of a night fishing float. His profile was delineated by the soft orange of the bonfire. He seemed a bit weary, but he was still beautiful. Someone started to play an old sad song on portable speakers. “Very sentimental,” Y laughed. “It’s Marlene Dietrich,” someone answered. I put my hands in the water, releasing the glowing something into the cold ocean.