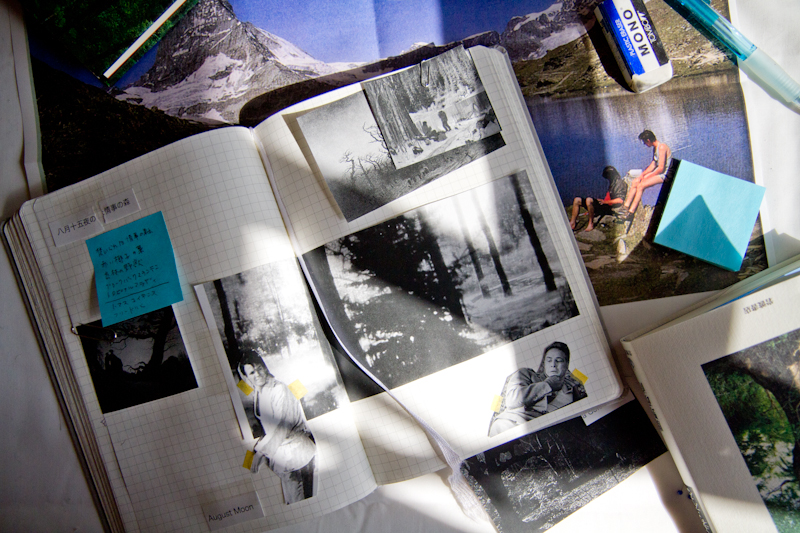 In The Teahouse of the August Moon, an American satirical film about the U.S. army efforts to civilize Okinawans after WWII, Marlon Brando plays the role of Sakini, an Okinawan interpreter, who mischievously prompts the Americans to build a teahouse in his village, instead of the originally planned pentagon-shaped school.

In his book Okinawa wo Kiku [Listening to Okinawa], Ikuo Shinjo discusses this character as “an interpreter, a being on boundary,” a colonized man who goes in and out of the bases, agitating the intense homosocial bonds among the military personnel. Brando, 32 at the time, plays the character with his young and masculine features veiled under thick yellow makeup. He seems de-masculinized and sexually ambiguous, a harmless being. Shinjo sees in this a reflection of Okinawa itself: a feminized entity, a conduit for the political and military bond between Japan and America that is forced to accept military bases at its core.

Ten years later, Brando played middle-aged Major Penderton in Reflections on a Golden Eye. He is well over 40; his youth and delicate features are gone. The movie takes place in an army post somewhere in America. The relationship between him and his wife has long gone cold; at night, he locks himself up in the library and admires a photograph depicting a statue of a naked David. One day, Penderton takes a horse ride into the forest, and deep in the woods he finds a naked young soldier caressing a horse. Disturbed, Penderton loses control of his galloping horse and falls to the ground. Physically and emotionally hurt, Penderton lies flat on the yellow blanket of fallen leaves and abruptly bursts into tears. The naked soldier walks over him to reach the excited horse. Penderton looks up to see the soldier’s back: beautiful, David-like youth.

Forests have provided backdrops that stimulate clandestine meetings and transformations in movies and novels such as Brokeback Mountain, Tropical Malady, Ludwig, and The Beast in the Jungle. I cut out the photographs of Sakini and Penderton and made them face each other in a forest setting but the collage didn’t look quite right. Yet, I felt something was taking shape in the makeshift collage of Sakini and Penderton.

In the days when I was an avid reader of comic books, the line that thrilled me most, because it promised to reveal something that had been taking place at the same time as the more obvious bits of the plot, was “Meanwhile, in other part of the forest…” —usually inked in capital letters in the top left-hand corner of the box. To me (who, like any devoted reader, wished for an infinite story) this line promised something close to that infinity: the possibility of knowing what had happened on that other fork of the road, the one not yet taken, the one less in evidence, the mysterious and equally important path that led to another part of the adventurous forest.
—Alberto Manguel, Meanwhile, In Another Part of the Forest (KNOPF, 1994)