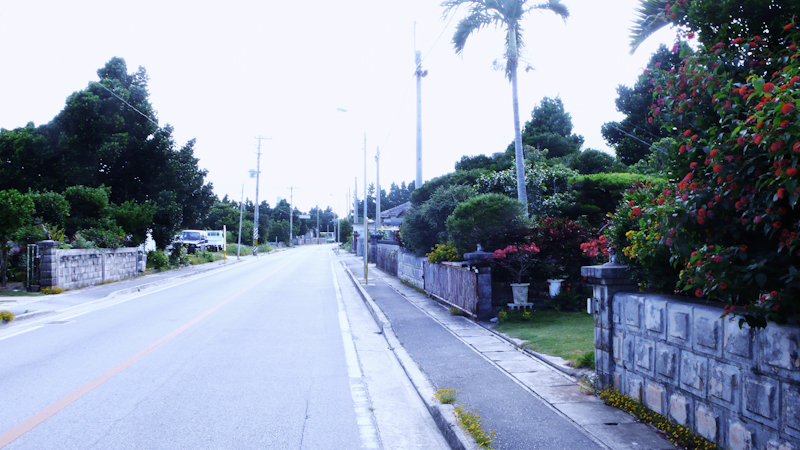 In the summer of 2010, I returned to the island where I had used to live. On the second night I walked around the city in the pouring rain: the deserted and decaying Peace Street; the Hill of Good Hope, which was full of mosquitos, poor cats and poor people; and Cherry Tree Road with no cherry tree in sight. Everything was wrongly named on the island. At the end of Cherry Tree Road, I met an American man without an umbrella. “I’m AWOL”, he said. Is that some sort of deserter? On the chest of his white T-shirt, the kind that every Army guy seems to wear these days, there was a beautiful, emerald-green flower beetle. I thought it was a broach, but it was alive, which seemed funny. The bug reminded me of my childhood… how I had found a flower beetle and tied a string to its leg so when it attempted to fly away, it could not go any further than the length of the string. Afterwards I went home and picked one of the ugly Ryukyu glasses that my parents had bought for no apparent reason and then caged the flower beetle inside it. Of course I had later all forgotten about it, and my dad had irritatingly looked for the missing glass for days. But you never used it, Dad.
That night, a typhoon had hit the island and cut the electricity off, so I took photographs of the soldier in the dark. Those angels who had sex with male humans… As soon as God found out about them and what they had done, he pushed the angels off of heaven, and they fell to the ground dead. Sometimes the dead angels would leave marks after, which were snow angels. You couldn’t see the dead angels because God would pick their bodies up right after. Between the shutter releases, he told me the tale of the snow angels. Later I looked it up and it just was a silly lie. The next day, I went to a nearby beach and tried to imitate the fallen snow angel, but the sand was too rough, so it looked awful. When the tides came in, my snow angel got swept away.
Every time I go to that island’s beach and look at the sea, Kerouac’s “On The Road” comes to my mind. At the end of his road trip, Sal Paradise looks at the sunset over the New Jersey skyline, thinking of the roads spreading far beyond, the people dwelling besides those roads, their dreams under the dark skies, and about Dean Moriarty. He then cries. Does he? I cannot remember… Sitting on the beach last summer, I vaguely thought about America, the place I once dreamt of living, and the AWOL (who came from that very place) who had left me that morning. I decided then to return to Tokyo.